A Ship in the Woods, Escondido, CA January 2019

In this interactive photo project I ask participants to take a selfie such that the details of their face fill most of the frame. The rules are simple: Make sure the lighting is not too dramatic; try not to pose, grin, smirk, or make other facial gestures. The purpose of the photograph is to document your face before you have meditated. After a 10-minute guided meditation, I ask participants to make a second selfie of their faces. We consider the making of the self portrait as an act of archiving how we look before and after meditation.

This is an ongoing project. It started for the “Grey Matter” exhibit at A Ship in the Woods in Escondido, California in January 2019.

In February I presented LabSynthE as an open space for collaboration along with a detailed case study of our 2019 project, Syntonic Refuge at CAA’s annual convention. I wrote this piece for the Flesh&Circuit panel, chaired by Conor McGarrigle and El Putnam in Chicago. Conor and El are working on a special issue of The Journal of Performance Arts and Digital Media, so it may be revised for publication in 2020-21. 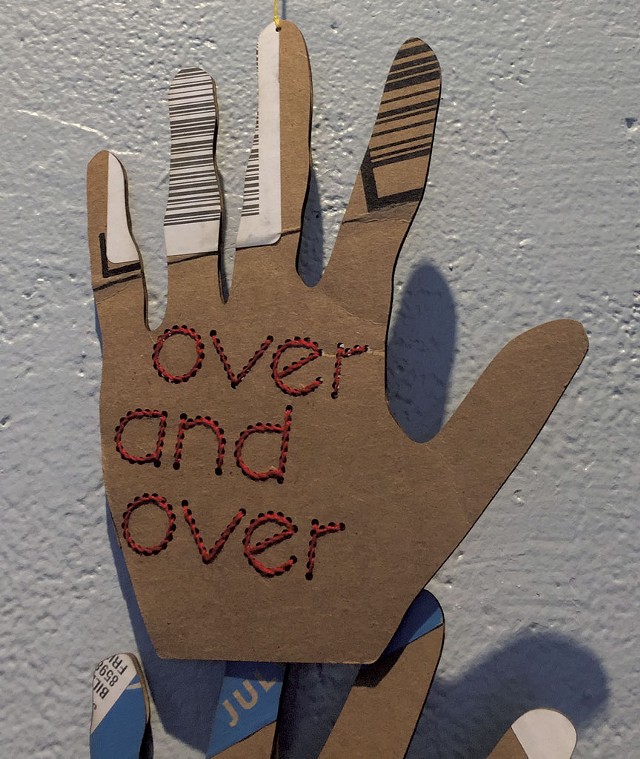 Rachel Elizabeth Jones wrote a terrific review of The Laboring Self at Christine Price Gallery for Seven Days Vermont. Jones is succinct about the role of aesthetics in this project, “Predominantly a conglomeration of cardboard and string, the exhibition doesn’t look like much. Behind the works, however, is a powerful mission: to make visible the labor of ‘hired hands’ in the digital space, and to detail that labor’s impact on the bodies and minds of those who perform it.” However, she concludes, “Combining digital savvy and low-fi craft, ‘The Laboring Self’ argues against the internet as an inherently liberating force. It counters that vision by highlighting how bodies and capital are caught in a complex, sometimes overwhelming, web — whether or not we can see it.” 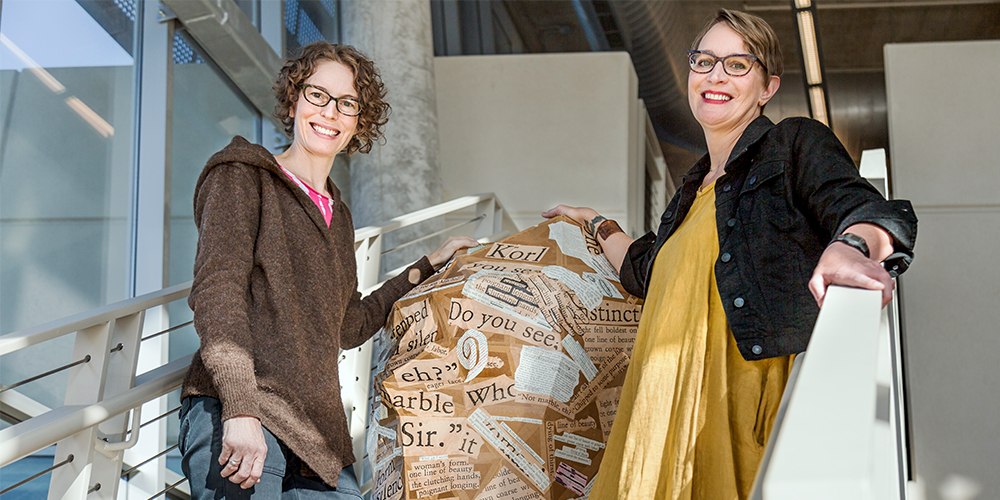 Stephen Fontenot wrote this generous article about my collaboration with Dr. Sabrina Starnaman on our project, The Laboring Self for The UT Dallas Magazine, “Professors Collaboration on Plight of ‘Invisible’ Workers.”

Here are some of my favorite parts:

“We meet an amazing cross-section of people at the DMA, and talk about their jobs,” Starnaman said. “And whenever we’ve brought up this project with UTD students, we learn many of them work via the sharing economy. You’ll witness this moment of connection — sometimes, it’s not until you see how your work interacts with the world that you really understand what you’ve made.”

As part of the exhibit, there are cardboard worker hands that visitors can write on to tell their stories.

“We ask the community, ‘How does work affect your body?’ People respond in Sharpie, some people even embroider, and that gets added to the exhibit,” Burrough said.

An artist statement I wrote about Mediations on Digital Labor at Grand Central Art Center in Santa Ana appeared in Leonardo on October 1, 2016. 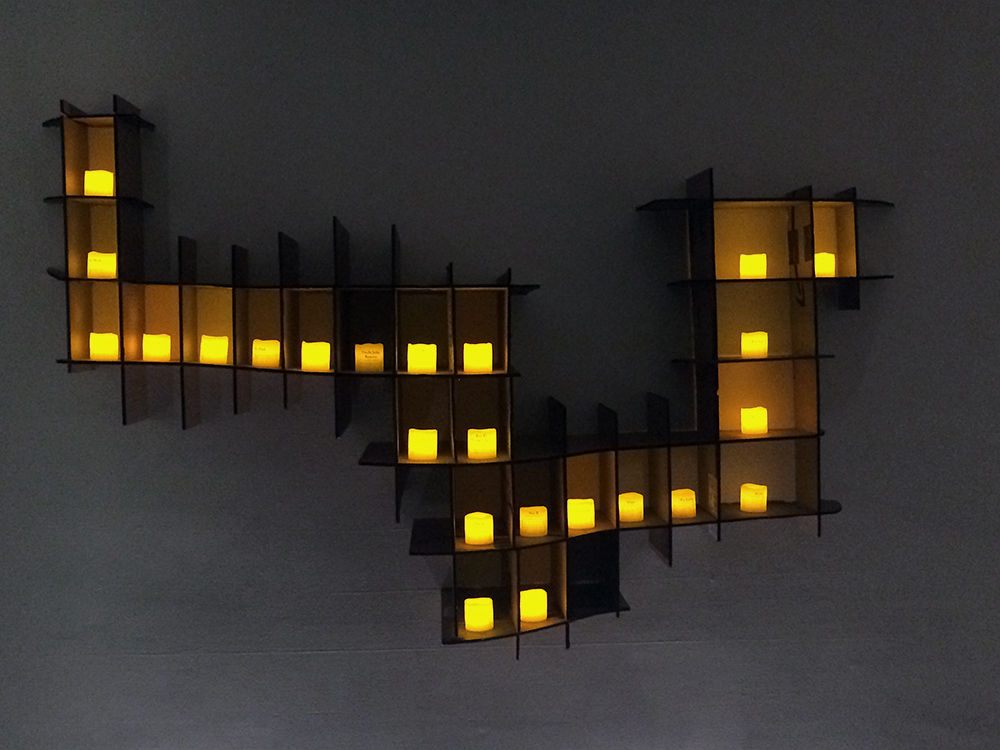 This has been a work in progress for the last year. The fabrication of the vigil (made almost entirely of repurposed Amazon boxes) would not have been possible without Amanda Marder in the UT Dallas FabLab. This was my first time at the iDMAa conference, which I submitted to as an exhibiting artist because Christiane Paul was one of the jurors (and I trust her judgement). The exhibit is full of inspiring work.  You should check out the list of artists and their websites on the iDMAa Exhibition webpage. 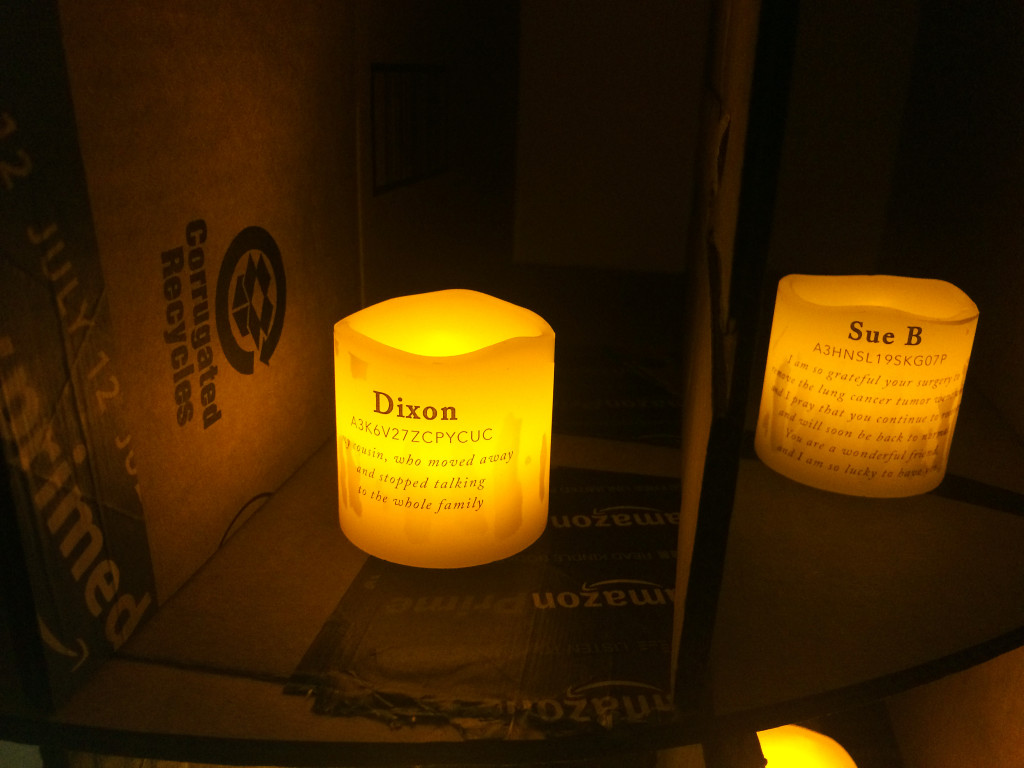 Here is the artist statement for this installation:

A Vigil For Some Bodies reimagines Amazon.com’s virtual job platform, Mechanical Turk (mtuk.com), as a site for recovering memories and investing in the human modality of the crowd worker. The shelf in this exhibition is fabricated from repurposed Amazon boxes. It holds artificial candles dedicated to the loved ones remembered by virtual workers. The sculpture, like Amazon boxes, is modular and can be constructed to fit various dimensions—in this format it is approximately 4 feet tall by 6 feet wide and 17 inches deep.

As a series of humanist, solidarity activities, I have been hiring digital laborers on Mechanical Turk since 2008 to realize their embodied selves in jobs where they are paid to perform athletic events (as in my previous project, Mechanical Olympics), meditate (in my participatory exhibit Mediations in Digital Labor), or chant “Om” for an ongoing video project, Endless Om. This project started as a Mechanical Turk job request in which I asked workers to light a candle in memory of a lost loved one. Fifty workers responded to my job by sharing details and memories with me by way of Amazon’s crowdsourcing platform. This interaction took place during the weekend of Halloween in 2015.

Shortly thereafter, Amazon advertised temporary job positions in their Fulfillment Centers during the November-December holiday season. I transformed my crowdsourced vigil into a series of modified battery-operated candles (purchased from Amazon.com) labeled with the names of those lost and remembered and the worker IDs of the Turkers who shared their memories. Then I applied for a job in a Dallas-area Amazon Fulfillment Center (AFC). I photographed the candles throughout the hiring process inside and outside the two AFCs I visited. The candles presented in this exhibition of A Vigil For Some Bodies have traveled to an Amazon Fulfillment Center, to Hong Kong during ISEA, and now to Winona for iDMAa.

I captured the above video to showcase the hand-drawn aspect of the exhibition, which Barton described as “chalked out on the floor of the gallery, using the natural lines of the black utility tile to provide something akin to a giant piece of lined paper, with the worker’s feedback done in cursive or block letters.”

Seen and heard below: A time-lapse video created on the night of the opening showcases the fragile nature of the “unencrypted data” on the floor of the gallery while the Mturk workers chant in unison (my digital post-production mediation). Barton wrote, “The now ephemeral quality of work (and lack of security that comes with it) reveals itself on the installation itself. Patrons have to interact with the misery of the workers represented: If they want to read what has been written, they have to stand on other words to do so. Those words—and the work represented by those words—slowly becomes an indecipherable blur of white chalk dust after enough people have shuffled through it.” 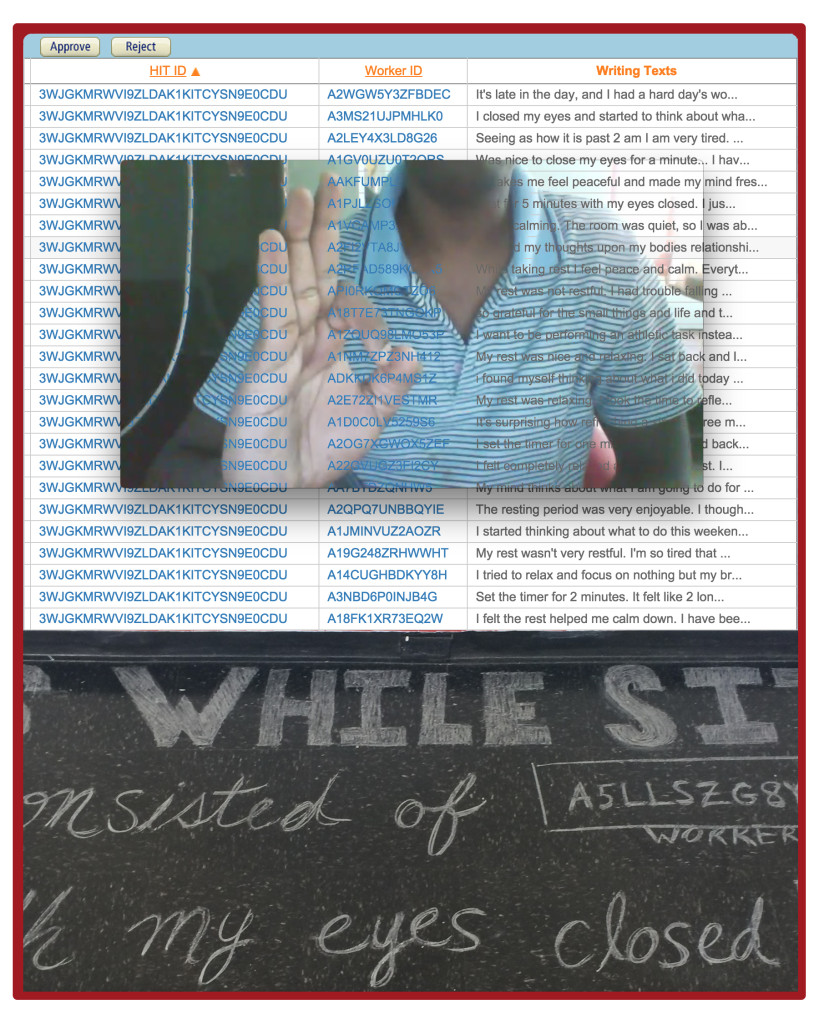 On May 2nd from 7-10pm I hope you will join me at Grand Central Art Center (Santa Ana, CA) in the Project Room for my opening of Mediations on Digital Labor.

Mediations on Digital Labor began with a hijacking of the Amazon.com Mechanical Turk website (Murk.com) for a critical, poetic, and alternative practice: Artist xtine burrough hired the Turkers to pause from physical labor.

As a play on the Mturk model, for which an industrial-sized, global workforce is paid less than minimum wage to work in untraced conditions, earning “rewards” paid on Amazon.com gift cards, the artist offered her set of workers 25 cents to break from labor for up to five minutes. She instructed the rested workers to describe their experience in 10-100 words. Trebor Scholz uses the word “playbor” (as in play/labor) to identify the tension between digital work and play that takes place not just on sites like Mturk.com but in all facets of online pseudo-participation. Scholz writes that in digital culture, “It has become increasingly difficult to distinguish between play, consumption and production, life and work, labor and non-labor.”

When more than 50 Turkers took burrough up on her alternative job she imagined the international group sitting together, respecting each other in silence. Though it is impossible to target a single worker, or a group of workers, for employment on Mturk.com she posted another “HIT” (Amazon’s word for “job” is “human intelligence task” or HIT) requesting a 10-second video of the worker chanting the word “Om,” for which she paid 75 cents per video and received nearly 30 responses. These videos became the pool of digital data stored on the jump-drives hanging from the Grand Central Art Center Project Room’s walls. Each digital container has one file, a single disembodied “Om” chant from a virtual worker. The workforce extends from the USA to India, and these chants are in various mother tongues. One of them was made electronically, the computer itself speak/chanting “Om.” Some of the videos include an image. Many are black or some variation on pink or red, the color made when a video-maker’s finger is pressed against the camera lens to conceal her identity.

On the floor of the gallery burrough has spent time in silence drawing out the Turkers’ feedback in chalk. Presented here is a small selection of the data, on her hard drive there is more than she could fit on the floor. Burrough chose the texts that resonate with her own experiences with intentional resting, or meditation. As viewers step into the gallery her chalk letters are unencrypted, analog data for human participants that morphs and erodes. Viewers are encouraged to participate: Reach for the sky to select a (now recycled) recording of the Om chant, or sit on the ground and rest. Use the chalk provided to add your feedback. What was it like to rest, intentionally, for a couple of minutes? How did you feel before and after your rest?

Like Scholz’s gray space between play and labor, this collection of digital chants, compiled from a virtual job board, showcases the voices of disembodied strangers making a sound that can accompany one’s return to her body at a vibrational frequency found throughout the natural world.

I’m excited to be traveling to New Orleans this week for the annual Popular Culture Association/American Culture Association Conference. The Communication and Digital Culture area, led by Mark Nunes, has been a long time theoretical “home” for me and I’m looking forward to experiencing all of the C&DC sessions this Thursday in Studio 8 at the Marriott.